The Science of Discworld II: The Globe 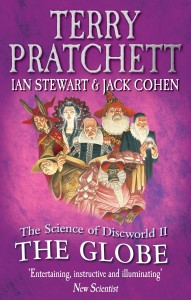 The acclaimed Science of Discworld centred around an original Pratchett story about the Wizards of Discworld. In it they accidentally witnessed the creation and evolution of our universe, a plot which was interleaved with a Cohen & Stewart non-fiction narrative about Big Science. In The Science of Discworld II our authors join forces again to see just what happens when the wizards meddle with history in a battle against the elves for the future of humanity on Earth. London is replaced by a dozy Neanderthal village. The Renaissance is given a push. The role of fat women in art is developed. And one very famous playwright gets born and writes The Play.

Weaving together a fast-paced Discworld novelette with cutting-edge scientific commentary on the evolution and development of the human mind, culture, language, art, and science, this is a book in which ‘the hard science is as gripping as the fiction’. (The Times)