Plus an all-star cast of leading British acting talent

Listen to an Extract HERE 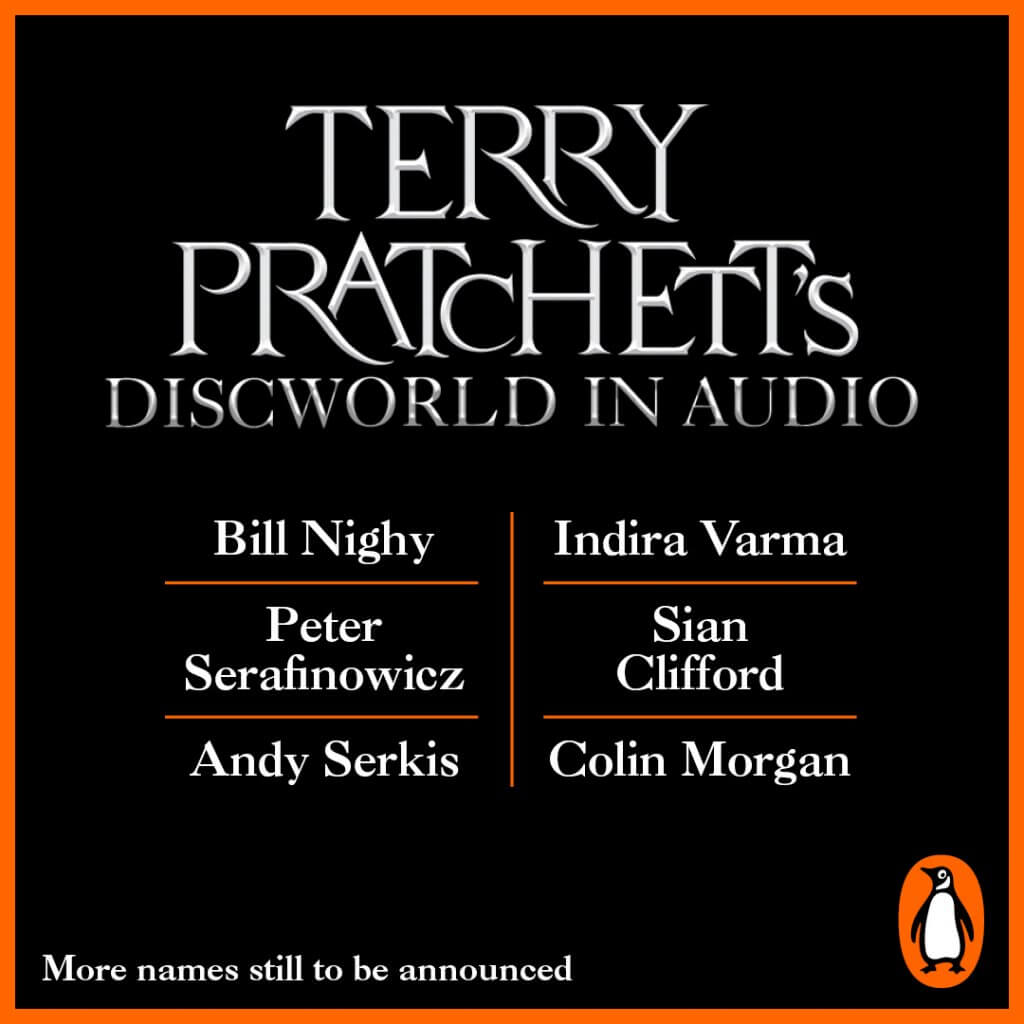 Penguin Random House has taken on a truly ambitious project to re-record all 40 audiobooks from Sir Terry Pratchett’s bestselling Discworld series, featuring a cast of leading names from British stage and screen, with the first subseries publishing in April 2022.

Pratchett annotated the Discworld series with his famous footnotes – essentially his own voice commenting on the story – which will be narrated by Bill Nighy, star of Love Actually and The Hitchhiker’s Guide to the Galaxy. Peter Serafinowicz, star of Shaun of the Dead and Star Wars, will voice the part of Death throughout the series. Pratchett penned the most inventive descriptions for Death’s curious, hollow voice, from ‘in tones as heavy as a whale’s heartbeat’ to ‘in a voice with all the warmth and colour of an iceberg’, with his speech represented in the books with small unquoted capital letters.

The Discworld series can be divided up into subseries, with one main narrator set to voice each subseries. Game of Thrones star Indira Varma is lending her voice to the Witches books, Fleabag’s Sian Clifford is reading the Death books and Merlin’s Colin Morgan will read the Wizard books, along with Andy Serkis, star of Lord of the Rings, reading the standalone title, Small Gods, with more casting for the rest of the series still to be announced.

‘I’m honoured to voice the footnotes and bring to life one of the funniest, quirkiest and best-loved aspects of Terry Pratchett’s world. He added footnotes to the pages of all of his Discworld novels. They are his personal commentary on the action, little snippets of information or funny asides. They feel very much like the voice of the great man himself commenting on the action. I’ve enjoyed it enormously’

‘Coming back to Terry Pratchett’s world after many years has been a pleasure. I loved his subversive, absurdist humour when I was a teenager and reading the part of Death, who appears in nearly all the Discworld books, has given me a renewed appreciation of his comic genius. What a very clever writer he was!’

BAFTA award-winning composer James Hannigan, whose many credits include music for the Harry Potter and the Half-Blood Prince and the Lord of the Rings video games, and the audio production of The Sandman, has been commissioned to compose theme tunes for the Discworld series.

For this ambitious project narrators will read nearly four million words, with nearly 150 days in the studio and resulting in over 400 hours of finished audio. The audiobooks are being produced and directed by Neil Gardner of Ladbroke Audio, the multiple award-winning radio writer & director, who shares a love of sci-fi and comedy, and is a life-long Terry Pratchett superfan.

‘This project is a once-in-a-lifetime opportunity for me and my team at Ladbroke Audio, and I am still pinching myself to ensure it is really happening. I’ve been buying Terry Pratchett’s books since 1987, every year without fail, and am an unabashed super-fan. And whilst it is the greatest honour of my career to be the producer/director of the Discworld series, there is an immense pressure to do Terry and the fans justice. It is a long, meticulous process for all of us involved, but there is much laughter along the way…all thanks to the unique and truly magical Terry Pratchett!”

‘It has been a joy to cast and produce these audiobooks, breathing new life into this magical series in audio and working hand in hand with Terry’s estate to ensure the same care and attention to detail that Terry applied to his writing. It is a real labour of love and we hope that Discworld fans both old and new will enjoy listening to these audiobooks as much as we have enjoyed making them.’

Penguin Random House and the Terry Pratchett Estate make this exciting announcement today to celebrate 50 years of Terry Pratchett, in the week of the 50th anniversary of the publication of Pratchett’s very first book, The Carpet People.

Rob Wilkins, who manages the Terry Pratchett Estate said:
‘I am so excited about the new Discworld audiobooks. When the first finished audio files arrived at the Chapel – Terry’s writing room and centre of the Pratchett Universe – I listened at full volume until the stone walls rattled and am beyond overjoyed with the results. It’s wonderful to have our dream voices bringing these books to life in audio, and James’ theme tune sprinkles magic lavishly over the opening of each audiobook. Bill’s narration of Terry’s dedications and footnotes, Peter’s incomparable voice of Death…. I could go on and on! Every single voice does justice to the wit, warmth and unique genius of Terry’s storytelling. The whole series comes together in such a spine-tinglingly good way, it’s an absolute thrill.

This has been a real passion project for all of us and we want to thank PRH Audio for putting this together so beautifully. We couldn’t be more delighted to have such a fitting tribute to Terry on the 50th anniversary of the publication of his first book and I can’t wait for fans and new readers alike to experience these magnificent new recordings.’
These new recordings will be published over the next two years as Discworld subseries: Witches (April 2022), Wizards (July 2022), Death (October 2022), Moist von Lipwig (February 2023) and City Watch and Tiffany Aching (April 2023). The standalone titles – Pyramids, Small Gods, The Truth,Moving Pictures, The Amazing Maurice and Monstrous Regiment – will also be published. A very special Christmas edition of The Hogfather read by Sian Clifford will publish early in December 2021.

Indira Varma, star of Game of Thrones and narrator of the Witches books said:

‘Reading the Witches series has been a fantastic experience. I love the characters of the three witches, Granny Weatherwax, Nanny Ogg and Magrat Garlick, whose unconventional style of magic gently pokes fun at tradition. Terry Pratchett has a genius for using humour to make us think, which really appeals to me, and I hope will appeal to the listeners too.’