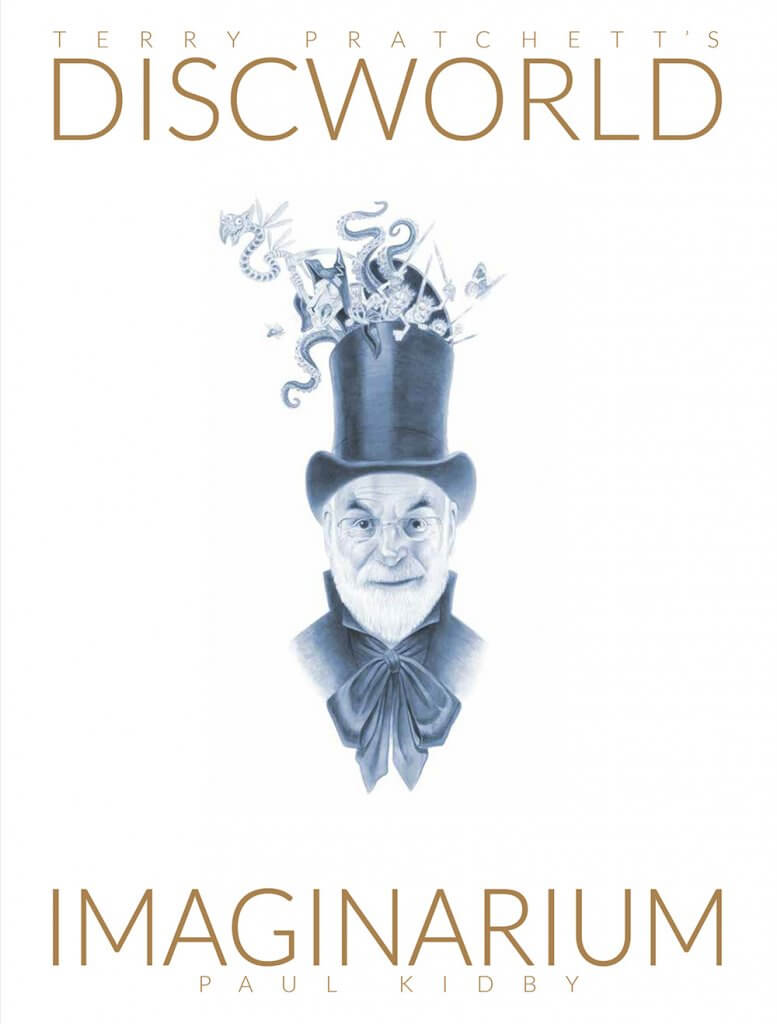 Gollancz is delighted to announce the acquisition of TERRY PRATCHETT’S DISCWORLD IMAGINARIUM, a stunning portfolio of illustrations from the brush of renowned Discworld artist, Paul Kidby.

Orion Group Publisher, Jon Wood, and Gollancz Digital Publisher, Darren Nash, acquired the rights to TERRY PRATCHETT’S DISCWORLD IMAGINARIUM from Rob Wilkins at Dunmanifestin, Ltd, which controls the copyright to all of Sir Terry Pratchett’s works, including his Discworld characters and creations. The 272-page full-colour volume will publish on 23rd November and retail at £35.

But that’s not all!  Taken from the Patrician’s private collection by a discerning art dealer* we’ve got a high-class treat for those looking for something  a little more distinct: a Special Edition, which will feature a variant cover, a new piece of art produced exclusively for this version and signed by Paul Kidby, metallic page edging, a marker ribbon and a specially-designed slipcase. Also, released on 23rd November, the Special Edition will retail at £75.

Artist Paul Kidby said, ‘I am delighted to present the DISCWORLD IMAGINARIUM: a comprehensive collection of my favourite illustrations painstakingly selected after many weeks spent rummaging through my portfolios. The resulting pages of this book not only look back at works past, they also look forward – with newly created artworks in celebration of the amazing ongoing legacy that Sir Terry Pratchett created for us all.’

* May he rest in peace

Self-taught artist, Paul Kidby, was born in West London in 1964.  He left school at 17 and worked as a commercial artist before becoming a freelance illustrator in 1986. He discovered Terry Pratchett’s Discworld in 1993 and since then has devoted his working life to the place. He is the illustrator of The Pratchett Portfolio, the bestsellers The Last Hero and The Art Of Discworld, as well as The Discworld Diaries, cards, T-shirts, maps, mugs and, of course, the covers. Paul lives with his wife in Dorset and is available for interview.

Sir Terry Pratchett is a publishing phenomenon. Among his many prizes   and citations are the World Fantasy Life Achievement Award, the  Carnegie  Medal, the BSFA Award, eight honorary doctorates and, of  course, a  knighthood. In 2012, he won a BAFTA for his documentary on  the subject  of assisted suicide, ‘Terry Pratchett: Choosing to Die’. He  is the  author of fifty bestselling books but is best known for the  globally  renowned Discworld series.

The first Discworld novel, The Colour of Magic, was published in 1983, and the series is still going strong almost three decades later. Four Discworld novels – Hogfather, Going Postal, The Colour of Magic and The Light Fantastic   – have been adapted for television, with more to follow. His books  have  sold approximately 85 million copies worldwide (but who’s  counting?),  and been translated into thirty-seven languages.

In 2007, Terry Pratchett was diagnosed with early onset Alzheimer’s Disease. He died in 2015.

Gollancz is the oldest specialist SF & Fantasy publisher in the UK. Founded in 1927 and with a continuous SF publishing programme dating back to 1961, the imprint of the Orion Publishing Group is home to a galaxy of award-winning and bestselling authors. Through our long-running SF and Fantasy Masterworks programme, and major digital initiative the SF Gateway, Gollancz has one of the largest ranges of SF and Fantasy of any publisher in the world.