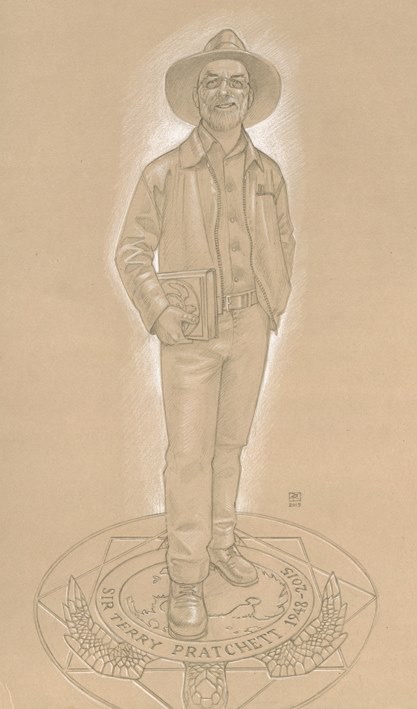 Salisbury City Council met at the Guildhall this evening to discuss the proposal to erect a permanent statue of Sir Terry Pratchett in the city. A  petition was launched by local Discworld enthusiast Emily Brand to garner support for the project and she has been overwhelmed with the response.  The petition took both the Discworld community and local social sites by storm, gathering over 8000 signatures since its launch in September 2015.  Emily spoke of the importance of Sir Terry’s books and his residence close to the city, as well as his support for the community at large, including being a generous – albeit often discrete – benefactor of many local projects.  Emily requested that the collective voice of thousands of fans and readers be heard and consideration given to remembering Sir Terry and his work.  Terry’s business manager and long time friend Rob Wilkins and artist Paul Kidby were also in attendance at the meeting to add their support to that of the author’s family and highlight the approval of his estate.

Discworld illustrator Paul Kidby – widely known as Terry’s artist of choice – has been proposed as the designer of the statue and has already submitted a first draft design (pictured above) which has been warmly received by all. Paul’s artwork has graced dozens of Discworld books over the past twenty years and his work is known and celebrated worldwide.

The proposal was met with unanimous approval by members of the council and has now been moved on to the next stage for further discussion.

Here at Discworld.com we are delighted to pledge our support for Terry’s statue and look forward to keeping you updated here on our website, together with our Twitter and Facebook pages.

If you haven’t already, please do sign Emily’s petition here.