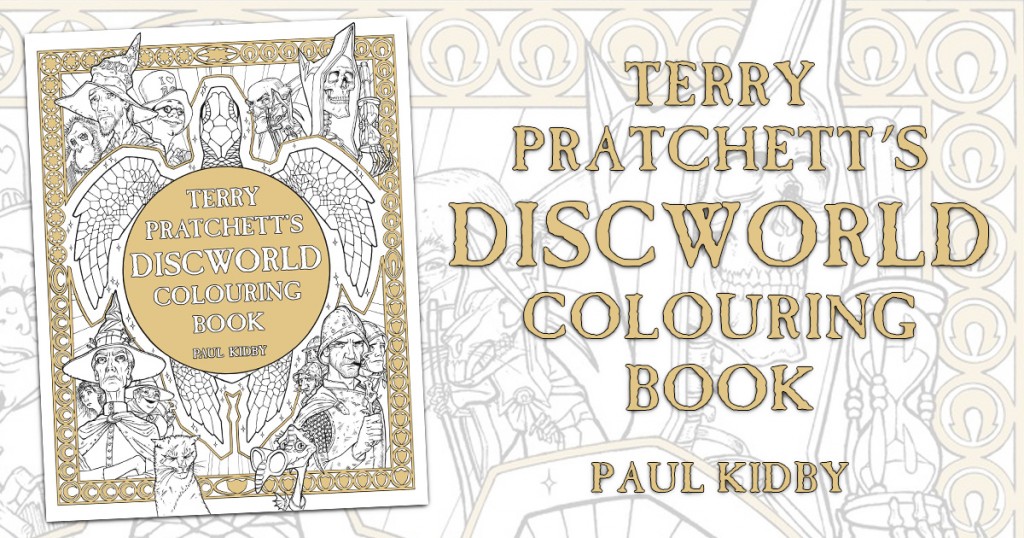 Gollancz is delighted to announce the acquisition of World Rights to publish a colouring book of line drawings by Paul Kidby, Sir Terry Pratchett’s artist of choice.

Gollancz Digital Publisher, Darren Nash, brought the rights to Terry Pratchett’s Discworld Colouring Book from Rob Wilkins at Narrativia, who own and control the exclusive multimedia and merchandising rights to all of Sir Terry’s works, including his Discworld characters and creations.

Darren Nash said ‘This is the perfect mix of fad and phenomenon: adult colouring books and the UK’s bestselling Fantasy series. And the fact that it’s come from Paul and Rob is a guarantee that Sir Terry’s creations will be treated with the respect they deserve.’

Rob Wilkins said: ‘Paul Kidby is Terry Pratchett’s artist of choice. Paul – in a seemingly effortless and certainly modest way – breathed life into Terry’s characters for more than two decades.  Terry often commenting that Paul must have the ability to step right into Discworld, because the accuracy with which he depicts his creations often surpassed his own imagination.’

Paul Kidby said: ‘It’s been a great pleasure to select some of my favourite artworks and recreate them as line drawings here ready for colouring. Now it’s over to you to embark upon the Discworld colouring-in extravaganza. The future is bright; it’s not orange, it’s Octarine!’

If Terry Pratchett’s pen gave his characters life, Paul Kidby’s brush allowed them to live it.  He provided the illustrations for The Last Hero, which sold over 300,000 copies, and has designed the covers for the Discworld novels since 2002. He is also the author of the definitive portfolio volume The Art Of Discworld.

Terry Pratchett’s Discworld Colouring Book will be published by Gollancz on the 11th August priced at £9.99. You can pre-order your copy here from discworld.com.

Paul Kidby discovered Terry Pratchett’s Discworld in 1993 and since then has devoted his working life to the place. He is the illustrator of The Pratchett Portfolio, the bestsellers The Last Hero and The Art Of Discworld, as well as The Discworld Diaries, cards, T-shirts, maps, mugs and, of course, the covers.

Sir Terry Pratchett is a publishing phenomenon. Among his many prizes  and citations are the World Fantasy Life Achievement Award, the Carnegie  Medal, the BSFA Award, ten honorary doctorates and, of  course, a  knighthood for services to literature. In 2012, he won a BAFTA for his documentary on the subject of assisted suicide, ‘Terry Pratchett: Choosing to Die’. He is the author of more than fifty bestselling books but is best known for the globally renowned Discworld series. The first Discworld novel, The Colour of Magic, was published in 1983, and the series is still going strong almost three decades later. Four Discworld novels – Hogfather, Going Postal, The Colour of Magic and The Light Fantastic – have been adapted for television, with more to follow for both the small and big screens. His books have sold approximately 85 million copies worldwide (but who’s counting?), and been translated into thirty-seven languages. In 2007, Terry Pratchett was diagnosed with early onset Alzheimer’s Disease. He died in 2015.

Gollancz is the oldest specialist SF & Fantasy publisher in the UK. Founded in 1927 and with a continuous SF publishing programme dating back to 1961, the imprint of the Orion Publishing Group is home to a galaxy of award-winning and bestselling authors. Through our long-running SF and Fantasy Masterworks programme, and major digital initiative the SF Gateway, Gollancz have one of the largest ranges of SF and Fantasy of any publisher in the world.

Independent production company Narrativia was launched in 2012 by Sir Terry Pratchett. The company owns and controls the exclusive multimedia and merchandising rights to all of Sir Terry’s works, including his Discworld characters and creations. With more than 85 million books sold worldwide, Pratchett’s writing has created a literary phenomenon across the globe and Narrativia protects and unites the management and development of this brand. The executive team, headed by Managing Director and BAFTA winning producer Rod Brown is based in London, where he works closely with co-directors, celebrated writer Rhianna Pratchett and Terry Pratchett’s Business Manager, Rob Wilkins, who all jointly own and control Narrativia.