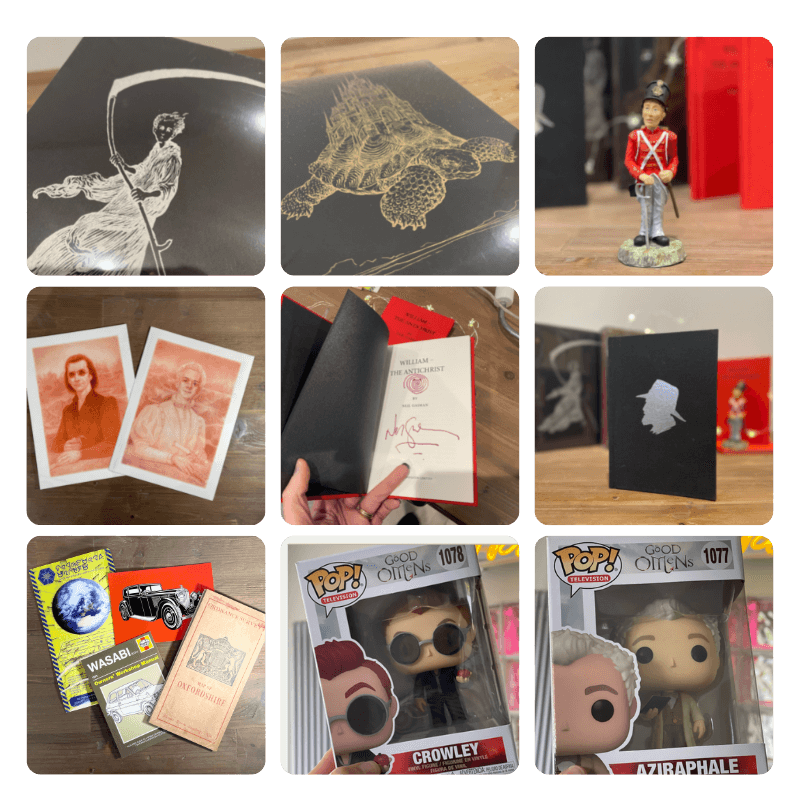 DAY ONE
1st December / 12am to Midnight GMT

An extremely collectable slip-cased edition of Small Gods, illustrated by Omar Rayyan and published by the Folio Society in 2016. Bound in crimson velveteen covered boards with a colour printed paper label on the front cover together with gold blocking on the spine. A beautiful edition.

An extremely collectable slip-cased edition of Mort with an introduction by A.S.Byatt and illustrated by Omar Rayyan.  Bound in crimson velveteen covered boards with a colour printed paper label on the front cover together gold blocking on spine. A beautiful edition. Published by the Folio Society in 2016

A perfect example of one of Clarecraft’s last figurines – Polly Perks / DW167 – in its original box and complete with tent card.

“No, sir. I was a – I am a girl, and I cut my hair and pretended I was a boy and took the Duchess’s shilling, sir.” – Monstrous Regiment.

A pair of angelic and demonic portraits of Aziraphale and Crowley from Good Omens, drawn by Paul Kidby in the unmistakeable style of Leonardo da Vinci and printed on beautiful textured paper.  (19cm x 26.5cm)

Two copies for two lucky winners. The Little Red Book – William the Antichrist by Neil Gaiman – the text Neil originally sent to Terry Pratchett that became Good Omens. Complete with an introduction by the author. Bound in scarlet cloth with black endpapers and signed by Neil.

The Little Black Book. Given to all those attending the ‘Celebration of the Life and Works of Sir Terry Pratchett OBE 1948-2015’, held at the Barbican Theatre, London, on 14 April 2015. Bound in black cloth with marbled endpapers, the front cover is blocked with a profile of Terry and a honeybee on the rear.

An antique Ordnance Survey map of Oxfordshire, centered around the village of Lower Tadfield. An alien parking ticket, printed in a lenticular style and two postcards; one depicting the Owner’s Workshop Manual for the Wasabe 823cc and the other a sketch of Crowley’s beloved Bentley.

A pair of Funko Pops, presented in window display boxes, of Crowley holding an apple and Aziraphale reading Agnes Nutter’s Nice and Accurate Prophecies. Bring about Armageddon in your own home!

We will be treating each day as a separate giveaway. You can pick and choose which days you’d like to enter; 1 day, a few or all of them.

For each of the days that you choose to enter, follow these three easy steps:

1️⃣ Be sure you’re following us on Instagram @discworld.com_official

3️⃣ Leave a comment and tag a different person every day. Repeat mentions will not be counted.

🌎 Open worldwide to anyone age 16+